What emergency pothole repair means to your app 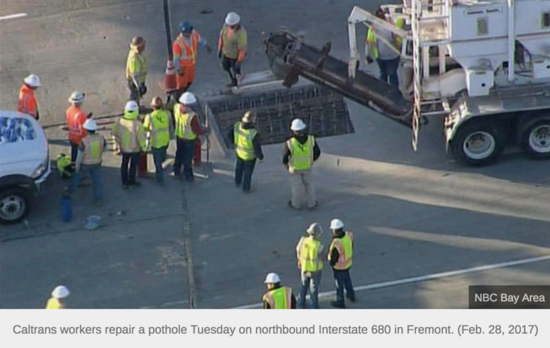 Traffic in the Bay Area can be bad, but it seems I have had triple bad luck in the past few weeks. Don’t worry, I assure I will bring this back to Design Systems Engineering.

First, I was thwarted on my way to Santa Cruz by a crazy failed robbery attempt. The robber when confronted, dropped the cash and ran out into the woods. Then later that night stole some clothes and a minivan and tore up the mountain only to be thwarted again. He ran off into the woods again and the manhunt ensued. Supposedly he stole an unmarked police vehicle which ended up in San Jose, right in the middle of one of the largest interagency manhunts I have ever seen in the Santa Cruz mountains.

I talked to some locals, apparently bank robbery is a common thing there.

We ended up driving all the way up the coast and spent most of the day driving for what should have been 40 minutes.

Then, last week on the way out of Merced we came across another un-passable mountain pass. We pulled off the road for hours. We even tried inching forward at about 1/4 a mile per hours, going nowhere fast. We ended up turning around, going right back where we came from to San Jose and spent from 4pm to midnight which should have been an easy 2 hour drive.

Today I am stuck in the East Bay as a catastrophic pothole has caused the entire south bay area to slow down to a standstill. See photo below.

Looking at this, you can see how this could really put a dent in the normal traffic. But let’s take a look from another angle before the repair. 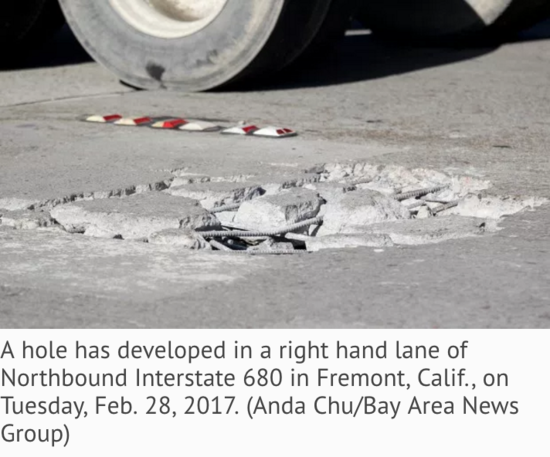 From this angle it doesn’t actually look that bad.

It is easy to take things for granted when you are whizzing by at 10+ the posted speed limit along with all the other commuters. Sure there are potholes, bumps, crazy drivers and other hazards. But you don’t really think about that when driving. It isn’t until the pothole is huge, rebar poking through, and commuters complaining it is a sinkhole the size of the entire lane (and exaggeration, but a sometimes necessary one to get CalTrans on the scene).

With a web app or large site you have worked very hard to establish a certain level of trust. Just as you trust the road won’t fall out from under you when you drive on the freeway.

So there you are whizzing your customers to and fro with efficiency and ease. And then it hits, an “emergency pothole” situation. The problem is on a freeway, people will call the CHP (California Highway Patrol) which will send CalTrans out in droves to handle the repair.

On the web there is often nothing to show that you have disrupted your customers journey. There is no CHP or CalTrans out on the scene trying to fix the situation. But you have the same result, gridlock and a bunch of upset drivers that can’t get to their desired destinations.

Be sure to make your customers happy. One good way to do that is with Design Systems Engineering on your side.